Last week we took a look at various support talents which were expected to have a major impact on the game. It turned out, however, that their impact on the game was potentially overestimated, with the alternative frequently being a superior choice.

Today, we would like to discuss the talents, which have the highest winrate discrepancy, compared to the alternative. While some of the alternatives are similarly at risk of being an effect of a game-losing scenario, rather than a cause, many talent choices in this list can be looked at as independent from the state of the game. Data is based on the statistics from the first two weeks of 7.xx Dota. 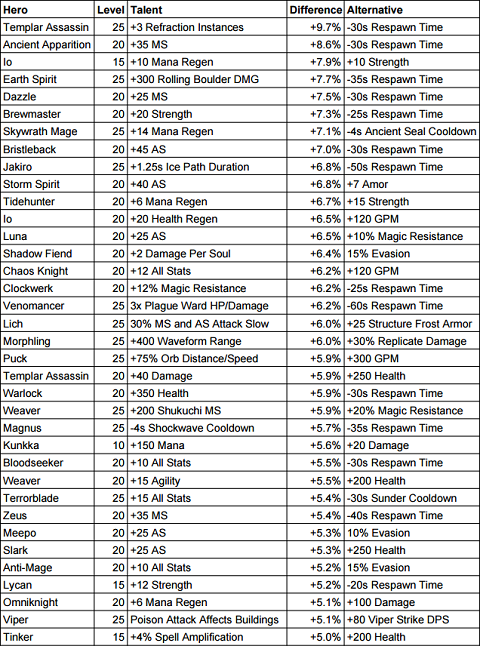 Io is a rather weak pub hero—only in 4k+ games does his winrate start to get respectable, and even then, it is still below 50%. However, there is a clear winrate progression, which increases depending on the average skill of the game. It’s reasonable to draw the conclusion that the hero can become truly scary the more skilled and coordinated the players of a team are. The professional scene certainly agrees.

Io has two talents on the list, which have >5% difference in winrate, compared to the alternative. At level 15, he has a choice between extra 10 strength or +10 mana regeneration. At level 20, the choice is between +120 GPM or +20 health regeneration. In either case, going for regeneration is more likely to result in a victory.

Considering what role Io generally fills in the game, the results are very unsurprising. A good Io player should avoid being on the front lines and the hero is very item-independent. Moreover, regeneration boosts scale exceptionally well with his

Tether, since he provides 1.5x the amount to an allied target. Even at a point, where a support Io has reached level 20, extra 30 HP/sec can make a huge difference for a core. On the other hand, getting +120 GPM in a game, that is likely to end in the next 15 minutes or less, is generally a poor choice.

Ancient Seal’s cooldown. Interestingly, it is the +14 mana regeneration that wins by a huge margin—7.1% difference in winrate.

Skywrath Mage’s case is a bit different, as only the cooldown of a single ability is changed.

Ancient Seal is a very strong silence—6s can become a genuine problem for a variety of heroes, especially as it also significantly amplifies the incoming magic damage. By the time Skywrath Mage reaches level 25, the enemy is very likely to have answers to the silence in the form of

Lotus Orb. However, this talent corresponds to almost 30% cooldown reduction or a 17% increase in the ability uptime, allowing to have it available, when the enemy is vulnerable again.

+14 mana regen is a deceptively strong level 25 talent. The extra regeneration is massive, often more than doubling the mana regeneration of a support Skywrath Mage. Moreover, it almost certainly guarantees a continuous use of

Overall, the sample size for this statistic is probably very small—Skywrath Mage rarely reaches level 25, especially when played as a support. Hence, absorb this information with a degree of caution—a massive winrate difference does not necessarily indicate a massive difference between the power levels of the talents.

At level 20, Tidehunter gets a choice between either +6 mana regen or +15 strength. Once again, the extra regeneration wins, with a 6.7% winrate difference.

More often than not, the main goal of a Tidehunter player is to provide a clean initiation or a timely counter-initiation. After that, his impact on the fight is restricted to incoming right-click damage reduction and armor decrease/slow on a priority target. While both of these aspects should not be underestimated, the duration of a typical fight should allow the hero to continuously use his abilities without thinking about the manapool too much.

An average Tidehunter has roughly ~1100 mana at level 20—typically built Guardian Greaves and Force Staff cover most of the hero’s mana requirements. In good games, having a Shiva’s Guard or a Lotus Orb, on top of these most frequently built items, is also not out of the question. Therefore, the winrate discrepancy can be looked at as a consequence of a rough start, with frequently dying Tidehunters opting for a safer option with the extra health.

The hero in his current state is almost “perfectly balanced” with an average winrate of almost 50% across all brackets. That said,has one of the highest differences between talent selections at level 20—taking +2 damage per soul is significantly more effective compared to 15% evasion.

Once again, the safety option having a lower winrate might be associated with an already game-losing scenario, however it should not subtract too much from what impact the +2 damage per soul has.

+2 damage per soul results in extra +72 damage on a fully loaded Shadow Fiend—the number itself is already quite scary, regardless of context. Moreover, it also provides a neat safety net for the hero, preventing him from being very weak after a buyback/respawn.

Additionally, this makes Aghanim’s Scepter a significantly more effective purchase—going for a “caster Fiend” is no longer necessarily associated with a massive right-click DPS drop, and it still provides a nice ultimate improvement as well as some survivability for the hero.

The early level talents are definitely the most interesting to look at, since at this point in the game, the probable outcome is not as clearly defined, and the talent itself has a lot more time to prove its worth.

Kunkka gets a very interesting choice at level 10—either +20 damage or +150 mana, with the choice of mana having a significantly higher winrate—a 5.6% difference.

The idea of a support Kunkka has been viable for a very long time. The most recent significant changes to it were proposed by 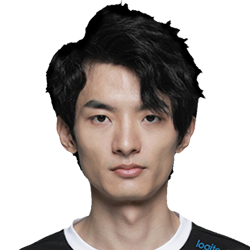 LaNm, during the pre-TI6 period. His support Kunkka almost always went for

Phase Boots followed by an

Armlet of Mordiggian. This allowed the hero to remain an adequate damage source for the majority of the game, since his cleave damage ignores armor value.

At the same time, this build leaves support Kunkka (with

Torrent. +150 mana extends the usefulness of the hero by almost a full

Torrent combination, which, if performed properly, corresponds to extra 300 magical damage and 1.6s of stun, followed by a 4s slow. To get the same amount of damage from the +20 damage talent, Kunkka would have to hit the enemy several times. The +20 damage choice also loses all the associated utility.

Yet another relatively early talent selection with a high winrate difference—Tinker gets to choose between +4% spell amp or +200 health at level 15, with this minor DPS increase performing better than the safety option.

Naturally, the safety option is associated with already game-losing scenarios and 4% Spell amp looks like a very minor upgrade, but do note that not only does the Tinker is almost always guaranteed to die, if he is caught, regardless of his HP pool, but he also casts a lot of spells. A lot.

With the typical magic resistance in mind, a nuke combo from Tinker deals 582.5 raw damage to a single target, without any spell amp sources. The 4% increase, therefore, adds laughable 23.3 extra damage on a single target—frequently less than a right-click from a level 1 hero.

Potential Shiva’s, Dagon and Ethereal Blade purchases make this miniscule spell amp add up to a respectable amount, however—from this talent alone, you can deal up to 86 extra damage per a full cast to a single target, or 78 without the Shiva’s.

When one starts adding up potential Aghanim’s Scepter purchase and take into account the possibility of multiple targets being hit, this spell Amp becomes a lot less ridiculous—it is by no means scary, but it should be respected. Dishing out upwards of 150 extra damage spread across the enemy team every other second is a definite upgrade. Very good read -- in general, it sounds like the regen abilities (mana or health/lifesteal) are the way to go, with some exceptions. That's been my experience. That's kindda stupid... Some of talents (like shorter respawn) are mostly picked when the team is already in a losing position. of course the winrate is smaller! As long as Replicate is treated like an illusion, and everything can fart it into oblivion, little buffs to its autoattack literally won't matter anything.

Generally you are correct, shorter respawn can be seen as a way to get back into the game, but keep in mind that some of those talents are at lvl 25 for supports. If your support is 25, either you are ahead or it is a very long, close game. If it is the former, you respawn faster and potentially die more often, throwing the game. If it is the long, close game, any fight could end the game, and you should be opting to save for buyback anyway, so the lower respawn time is generally going to come into play. Either you buyback, thus making it useless, or you lose because you couldn't get back in time even with the lower respawn.

In most situations where a support is 25, it doesn't matter what talent they choose, which is why the discrepancy isn't more severe. Lower respawn time earlier in the game for supports would in theory have a larger effect on the game.

not include in the topic because their winrate in both talents almost same , so no need to discuss them On Meepo I'm still unsure which one is better to get at level 15. Lifesteal or movement speed. Do you mind telling the winrates?

I think that ultimately depends on how you play the meepo. If you get blink you're not likely going to be needing the movement speed as you'll be playing assassin style. You might do better with movement speed if you are split pushing. The winrates might shed some light on which build is better though. Ah, the old Questionable Cause fallacy. You really nailed it with this article. Oh look, almost all of the heroes who choose a reduced respawn time or a strength gain have a worse win rate than when those same heroes chose a more offensive talent. I wonder if that's because the vast majority of the time, those talents are chosen because the team is already losing... nahhh. Yeah. Use the same logic, notice that teams that use glyph a lot tend to lose their games. Better stop using glyph guys.

Stats do lie my friend. useless article at best. at worst it will hurt the decisions of those that read it.

"many talent choices in this list can be looked at as independent from the state of the game" are you kidding? thats the dumbest thing ive heard in a while.

i'm no expert but i play higher mmr games than the author, why on earth is he allowed to spread lies to the masses.

KawaiiSocks is 4.5, you're 4 @ The Peru Effect ... Lmao you're playing equal mmr games.
But I do agree with you. The talent choices ARE dependent on the state of the game. Like the supports' gold/xp talents, they are more often than not picking them up from a losing position, as a desperate last chance attempt to turn the tides, which often doesn't happen, leading to their lower winrates. If it was possible, examine these talent choice options when reviewing games that are as equal as possible(net worth, xp and push as determining factors of "equal") when the talent choice was made, only then can conclusions have solid basis. +4% spell amplification is almost nothing on its own, but it leads to 15-20% spell dmg amplification when coupled with Aether Lens + Tinker's intelligence.

It's like 10% lifesteal: it's little on its own but may mean a huge difference when you pair it with another +15% lifesteal source (25% lifesteal is very impactant). Wrong result. When game is won already, you can pick any talent. Just for fun. But if you afraid to loose everything, you should pick a useful talents. Like respawn time Tinker, the best of the best :D