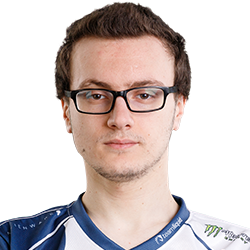 Amer "Miracle-" Al-Barkawi is a Jordanian/Polish carry player who was a pub star like few have been. In 2015, Miracle- climbed to #1 in the MMR leaderboards, garnering attention from Johan “N0tail” Sundstein who invited him to join (monkey) Business. That team would later turn into OG, and would go on to win the Frankfurt Major 2015 and the Manila Major 2016.

After OG was upset at The International 2016, Miracle- joined Team Liquid and most of the teammates whom he’s still with to this day. Together, they became known as the “kings of the lower bracket” thanks to their consistent deep runs in the lower bracket of major tournaments. Miracle- is one of the most winningest pros ever, winning multiple city Majors, a Dota Pro Circuit Major, and The International 2017. He’s known for his incredible plays on many different heroes but some stand-out heroes include Shadow Fiend, Invoker, and Terrorblade.